A RESOURCE IN SPIRITUALITY AND NONVIOLENT DIRECT ACTION FOR CATHOLICS WHO LOVE THEIR CHURCH SO BOLDLY THAT THEY WILL TAKE RISKS TO REMOVE INEQUALITY AND INJUSTICE FROM ITS MIDST AND MAKE ROOM FOR THE LIFEGIVING INCLUSIVITY OF JESUS.

When the Sabbath was over, Mary of Magdala, Mary the mother of James, and Salome bought perfumed oils so that they could anoint Jesus...They were saying to one another, Who will roll away the stone for us?
-- Mark 16: 1 & 3

Facilitator:
Mary Ann Cejka is a Catholic psychologist and writer residing in New York. An activist for church reform and peace-related issues, she is a frequent contributor to Corpus Reports and a former member of the board of CORPUS (National Association for an Inclusive Priesthood). She currently serves on the Executive Committee of the Federation of Christian Ministries. Her articles have appeared in a number of publications including National Catholic Reporter, Sojourners, America, the Catholic Worker, Maryknoll, and Christian Century. Artisans of Peace: Grassroots Peacemaking Among Christian Communities, edited by Mary Ann Cejka and Thomas Bamat (Orbis 2003), received the Pax Christi Book Award for 2004.

Welcome to
Roll Away the Stone 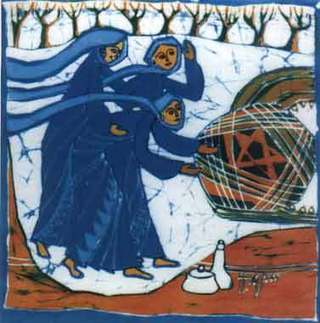 "Who will roll away the stone..." Batik by Hanna Cheriyan Varghese. (Click on image to link to Asian Christian Art Association.)

Costs for workshops & retreats:
- Travel expenses for facilitators from (or within) New York state.
- Cost of photocopies and other materials
- Room and board for facilitator
- Stipend (depends on length of event; goes towards program expenses only)